When I was in high school, I switched bedrooms. The room I had up until 10th grade had a single bed, flower and strawberry motif bedspread and curtains, and close proximity to the kitchen but it lacked the most important tool in an 80's teenager's social life: a phone jack. It also had that fake French provincial furniture (which for some reason is hip now) and embarrassment of all embarrassments -- my dollhouse. No self-respecting new wave teenager had dollhouses in their rooms, so I tried to hide that baby-ish fact by taking down my unicorn and baby harp seal posters and replacing them with something much more sophisticated, similar to this. 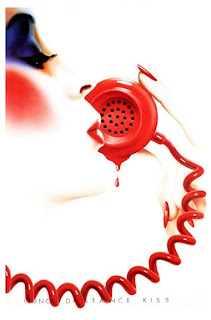 Mine was worse, if you can believe it. It had 2 ladies with rainbows coming out of their mouths. GROSS. From GBPosters' Flickr.


But in 10th grade, I was in business. My mom and dad let me move into my sister's old room, which had not only a phone jack, but 2 beds for sleepovers AND I got to leave my rainbows, unicorns, fake French provincial and dollhouse behind. I was going to have the new wave bedroom of my dreams! (As long as I ignored the wicker headboards. They had to stay, much to my chagrin.) "I want gray walls and black bedspreads and black and white striped sheets," I told my mom, much to her chagrin.

"Oh no," I said. "I'm going to hang up posters and record covers and stuff." I think she sighed.

But even though I was going to get my walls painted a tasteful dove gray, it wasn't going to happen right away and my parents gave me permission to draw and write on the walls. I envisioned a cool mural, something so amazing that I wouldn't even want to paint it over. Budding artist that (I thought) I was, I embarked on drawing a life-size picture of Twiggy that I copied from my dad's "This Fabulous Century: 1960-1970" book. Only problem was: I wasn't really a budding artist. After not getting Twiggy's hair (or face or body) right AT ALL, I drew a big bouffant instead. That didn't work very well, either, and since it was on the wall, I couldn't exactly crumple it up and start over. So I did what any dorky teenager would do: I changed the go-go girl into Boy George. 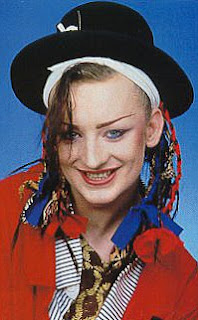 See how that works? The hat and the hair over one eye totally fixed the misshapen bouffant and lopsided face, plus he wore tunics so that took care of the badly drawn body.

So I had an ugly Boy George on my wall, plus my friend Karin and I wrote deep and meaningful Soft Cell lyrics everywhere, plus stuff like "I heart Bob" and my favorite band names du jour. Basically I treated my room like a giant Pee-Chee folder, and let's just say I wasn't exactly bummed to see Go-Go George and everything else get painted over. And at first it looked great -- my dad got my 2 favorite posters of The Beatles and Warhol's Marilyn framed, and it looked streamlined and cool (except for the dumb wicker headboards). But then, true to my word, I junked it all up with album covers, flyers, photos, clippings from magazines, books, knick-knacks, clothes everywhere and my bed was unmade more often than not. It was a total pit, but I totally loved it.


Now, a couple of decades later, things haven't changed much. I still junk up every bedroom I've ever lived in, and this one's no exception. Poor Jon has a dresser and the side of the bed, but our room is filled with all my stuff. Okay, no album covers and clippings -- just nicely framed prints of Avedon, Man Ray, Louise Dahl Wolfe and a few others -- but still. Everywhere you look there seems to be a ceramic poodle or a hatbox or shoes and jewelry and books tossed about. He is the clean one, and I am the cyclone, with bobby-pins and poodles flying in my wake. 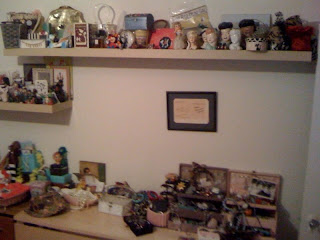 Stuff. Lots and lots of stuff.

But I did sort of re-do the bedroom -- Jon hung up these nice shelves for me, and a few years ago, I traded our leopard comforter (which had seen better days)for a brand-new Target faux mod-atomic-something-or-other design. My "office." And Norman.

And that's as far as we can really go -- since it's a rental, we can't paint or do much to it. And with my decor sensibilities, well, who would notice anyway? You'd be too busy fighting off the sensory overload that's already going on. Sometimes I'll go over to my friends' houses and see their beautiful, spare, Mid-Century style and get a pang of envy, but sometimes I meet people who are more like me -- people who have even more stuff than I have and I love it.

In fact, a few weeks ago I was invited to Dame Rusty's house for a kitsch party, and the guest of honor was Allee Willis, who is not only a Grammy winning songwriter, but a Kitsch Aficionado and "curator of The Museum of Kitsch! It was fabulous, and her website and blog are so much fun! Click here to read all about the Kitsch Party, and check out the link on the right to read about and see more of Allee's fun stuff and life. She is such an inspiration, and I was even honored to submit a photo to the AWMOK's Kitschenette! Click here for the coolness!

In any case, while I would love to redo my bedroom, the new bedspread and cleaning stuff off my dresser is about as far as I can go these days. So instead, today I redid my blog!

I hadn't updated since August 2009, and it was time. So today I had some time on my hands and messed around a little bit, and here it is. I cleaned up the links and the layout and then started getting cuckoo with colors. It's a bit misleading because it looks like a vintage blog (or like the movie poster of Hairspray or something like that) but whatevs. The background is the same fabric as my favorite purse, and I like the pink and blue and green accents. In short, it's sort of cluttered and busy just like my bedroom, so there you have it. Plus, like the one I did back in 2009, I think Zsa Zsa would approve of this one, too. 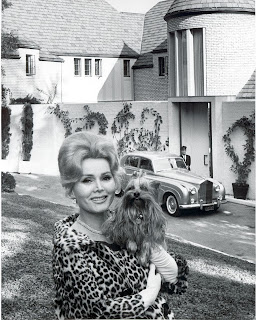 I can only imagine how Zsa Zsa decorated her mansion! And we're not that different -- she just had real glamour dogs, and mine are all fake on my shelf.


And you know what? By redoing my blog, I feel totally Accomplished, even if I didn't get out of my pajamas all day. Which is my most favorite kind of Accomplishment.

PS Don't forget to enter THE CONTEST!
Posted by Sparkleneely at 4:42 PM

Oh, how I wish you had a photo of that Boy George!