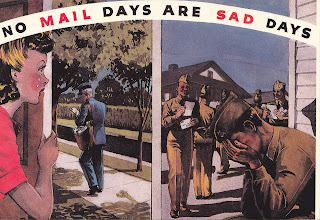 As I've told you before, I am a terrible correspondent. (You think this blog is bad? You should see my horrible inboxes on facebook, email, and probably myspace and friendster, too.)

But I looove getting mail. These days all I get are bills, coupons, and today I got the lovely whammy of a $260 "parking" ticket that I wasn't even aware of. (Curses on you, secret cameras at bus stops when I only stopped for ONE SECOND!)

The last crazy thing I got in the mail was THIS: 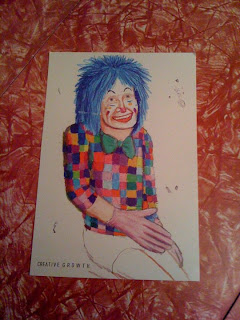 I mean sweet jeebus, what IS this? I'm sorry, there is nothing more frightening than what could very well be the 4th Horseman of the Apocalypse rendered as a wistful, unfinished clown. I was certain it was a death threat. Turns out it's some sort of circus thing that the previous tenant belonged to so it wasn't even for me, but I certainly enjoyed the delicious terror I felt and paranoid speculation I made upon receiving it.

But other than that, there's been nothing good in my mailbox for a long, long time. I got quite a few lovely Christmas cards, but considering I haven't sent seasons' greetings since the last century, receiving those are bittersweet. I always feel terrible because I know I'm never going to get around to reciprocating, and it makes me feel like a bad friend/cousin/niece, but I love getting cards and I tell myself, "Next year!" Or that perhaps I'll send Groundhog Day cards instead. Oh. Whoops.

In fact, on that topic, here's a side note digression about a letter that was the best story I heard in 2011. I was in Nashville, talking to an author about how I wanted to go to Monroeville, Alabama, to see Harper Lee's hometown. The man told me that he had bought a used book, a copy of Gerald Clarke's biography of Truman Capote, and inside he found a handwritten letter signed, "Nell." That's Harper Lee's real name. The letter was from Harper Lee to a close friend who had passed away (his estate sold his books to this store), and it explained why she cut ties with Capote, which is something she has never discussed. So not only did this letter found under the most unlikely circumstances clear up a literal literary mystery, but it has turned out to be a treasure for this man as well. And a story that made me writhe with joy. (If you ever want to see my mad love for Harper Lee, go here to watch me babble -- I talk how I write, or vice versa.)

Anyway, I love mail, even if I'm not good at it. But a few weeks ago, my friend Carla lamented on facebook (oh, the irony!), I think it would be nice to drop out of the social network and go back to sending real letters on real stationery with real photographs enclosed. I, along with a few other people Liked it and agreed with her, and as facebook comments evolved into conversation, it was decided that postcards were the way to go. Quick, quirky and fun, cheaper to buy and send, and not a long letter commitment. And everyone loves getting postcards, unless they're of scary Apocalypse Clowns. (Though some people like scary Apocalypse Clowns, I'm sure.)


Here is the Mission and Vision statement from Carla:

Not so very long ago, people communicated in ways that did not require clicking a Send button.
Pen pals, family members and businesses used handwritten messages to send information.

Sending postcards may not change the world but they cause us to connect with each other in a tangible way that gives the recipient more than just another message in their email account Inbox. And after all, who doesn't like receiving postcards in the mail?

The possibilities are almost limitless!

The basic guidelines are simple:
Send a postcard to someone you know.
Send a postcard to at least one person you've never met (you may have to enlist your friends/family/coworker/neighbors to help with this part)
Put your return address or the address of someone else on the postcards to keep the Project going.
Keep it friendly. It is a criminal offense in most countries to send obscene or threatening messages through the mail.
Be creative! Make your own postcards or customize existing ones.
Finally, tell your friends! There was a time when people had pen pals instead of 900 virtual friends. Let's see if there is some value in real written communication.


The Great Postcard Project began in January 2011 as a global experiment to see if an expanding network of people will connect with each other in a non-digital way that involves just a small amount of energy, effort and sincerity. Postcards were chosen as the primary means of communication due to their availability, reasonable cost and potential for creativity.


Just a few weeks ago, I was cleaning out my desk and I found a box of postcards -- a stack of received ones that I read over and it was so nice. It was almost like a journal: Oh, this is from when Leslie moved to Brooklyn and This is from Lara and Leah from Prague and That was the year Barb and I went to Vegas for Elvis's High Holy Day and What was Scotty on when he wrote THIS? It was so fun going through them -- feeling nostalgic, but also happy that my friends took the time to write me a postcard.

Also in the box was a HUGE stack of un-mailed postcards. A bunch of them were from when bars used to have those free advertising postcard kiosks, and I'd grabbed a bunch I liked and for some reason held onto them -- maaaybe I'd send them someday. But then there were lots more from when I worked at the bookstore -- simply images I loved and had held onto, thinking I'd never find them again. And more beloved images that had hung up on my bulletin boards and on dorm room walls, kept for sentimentality. But then I realized I was hoarding these postcards. Now with the internet, all these images are in easy grasp, and the ones that aren't I can scan if I needed to. I made up my mind to eventually deal with it, and put the box away and finished cleaning my desk.

Just a few weeks later, Carla posted her idea, and I was thrilled. An excuse to send out these postcards and free them into the world and make people happy! I jumped in feet first -- SUPER enthusiastically.

So far I've sent about 40 postcards to friends and strangers, and have gotten some really fabulous ones back -- some from people I know, and some from strangers which is fun. And I still have a list of people who will be getting one -- I decided that instead of doing a bunch at a time, I'll do a few a night to stretch the project out for a while, and I won't burn out. 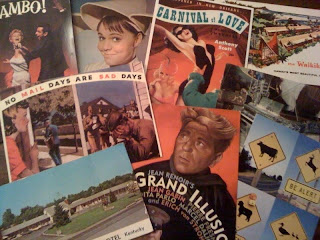 Some of the postcards I've gotten, and some to send

And it's been so great -- I've heard from people that just getting the postcards made their day better. Isn't that what it's all about? And personally, opening the mailbox and seeing something nice (instead of scary clowns and parking tickets) has made me so happy. I don't even care if I get many back -- it's the sending that I've enjoyed so much. Even actually GOING TO THE POST OFFICE to buy stamps has been fun, which is weird.

Please join the group and join the fun!The Great Postcard Project on facebook And it's easy -- just send postcards to people from whom you already have addresses (you MUST have your old non-digital address book around somewhere!) and ask your friends for their friends' addresses and send some of those along, too. And hey, if you want me to send you a postcard, send me an email -- nsparkle at earthlink.net.

If this project picks up steam (and I really hope it does!), postcards will be mailed all over the world. Think of how many people that can be affected in a positive way -- that's a nice thought. And the USPS will LOVE YOU FOR IT.


And maybe you'll be lucky enough to receive a 3D POODLE!!! 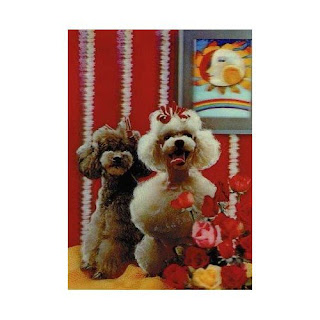 And yeah, okay. So this Accomplishment was supposed to be "Write a Real Letter," but I feel Accomplished sending out a bunch of little ones. Baby steps, I suppose. Hey, there are stamps involved. That counts, right?

Come to Monroeville and visit Harper Lee and Truman's hometown! We have a wonderful Museum and walking tours of downtown. The Play, "To Kill a Mockingbird" is Alabama's hottest theater ticket and they go on sale March 1. We would love to have such a literary enthusiast like you!

Stephanie -- That sounds wonderful!!! It KILLS me that I'm going to Birmingham on Wednesday for a quick work trip, but I'll be back in May and I am going to take you up on your offer! And I promise, if I DO get to eat at the Country Club where Miss Lee luncheons, I won't approach her. ;) But it's been a dream of mine to visit, and I would very much love to be a guest in your town. Thank you so much! And I'll be sure to send postcards. :)

Shoo fly! I want to do this so badly! Why does it have to be on that mean ole Facebook?

Oooh, honey, it's not just on facebook! That's just where the idea was born and the group is, but you don't need to be on there to take part. It's just a fun thing to do, and right up your alley. Put it on your blog if you'd like! And I can send you some addresses. ;)

I love this! I love this so much! Also: that clown looks like early Rod Stewart.

Gah! You got that clown in the mail?! That's scarier than a bill! I would shriek right out in the street!

I wanted to do the Postcard Project, but I don't have any postcards.. and, you'd think they'd be easy to come by in the Philadelphia area, but I wouldn't know where to start looking (I'm not right IN Philadelphia)!

I want to tell you that your "To Kill A Mockingbird" youtube video had me welling up and just about crying my eyes out... I feel the same way. I just found out I am pregnant--shhh...haven't told anyone... (after being diagnosed with unspecified infertility and having a set of twins via ivf/fertility treatments) and my husband and I have been set on having a girl named Harper Lee... Anyway I had to share that with you! Also your blog always makes my day!

Oh Marcella, thank you so much for your comment. I read it at work and teared up myself! I'm so happy you shared that news, and I can't wait to hear more about your little Miss Harper Lee... congratulations! You made my day! xoxo