Yeah, pretty much right on the mark. Though I did win the Batter Blaster contest which was awesome and did The SF AIDS Walk again, which does my heart good. And I've sold some Tupperware, so that's an Accomplishment -- even though I'm not exactly the busiest Tupperware Lady on the planet. I wish I could do it more, but life gets in the way of Fantastic Plastic and Accomplishing stuff.

But as far as a personal Accomplishment, this was a highlight: I got to stay at The Algonquin Hotel which has been a dream of mine since I was a freshman in high school and discovered Dorothy Parker and wanted to be JUST LIKE HER. They even gave me a FRUIT PLATE and a stuffed Matilda cat, but I have a feeling they thought I was someone else. Like someone famous or important, and I didn't want to correct them and have them take my fruit plate back. But I did become quite a bit like Dorothy Parker after a few drinks in the lobby, so actually that fruit plate came in quite handy the next morning when I wasn't feeling so hot. I love The Gonk! 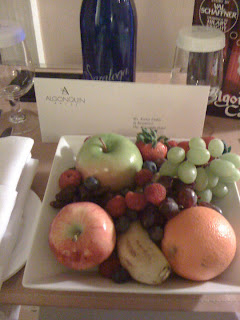 I bet Dorothy Parker never got a fruit plate.

But, honestly, I did make it another year and had a good time. My family and friends are well, and I am thankful for them all. I read a lot of great books, went to a very special wedding, traveled a bit, eliminated baggage, and got a new couch. So 2010 was pretty good, even if it was LAZY. I blame GETTING SNUGGIE-FIED.

In any case, my resolutions for this year are actually attainable, so that I can Accomplish them. One of them is to get dressed up more often, which I already have: 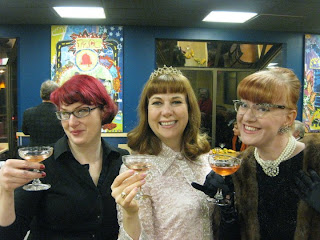 
My friend Carrie (in the middle, and you MUST read her blog) had this genius idea to celebrate her birthday at Taco Bell, with a Black Tie dress code. How fabulous is that? Champagne and chalupas are super bueno, and it was so much fun!

My second resolution of the year is to wear more hats, and I've gotten to do that, too: 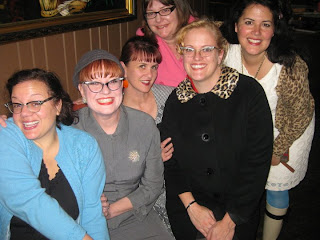 My friend Dorinda started a fun new "club" called Les Dames Du Gateau. It's a West Coast chapter/homage to The Dames du Boeuf, a fabulous New York gathering of ladies who dine in old school restaurants. My friend Pearl is a member of that group, and I've always thought it was a wonderful idea -- so when Doe invited me to join the Bay Area bunch, I was thrilled. I have to say, it's my most favorite thing that has happened to me in 2011 -- an excuse to get dressed up and dine in fancy old restaurants with such wonderful company and sparkling conversation? YES, PLEASE! We've gone twice now and each time I've felt as if I've been walking on air. I didn't wear a hat last time, but still, look how marvelous: 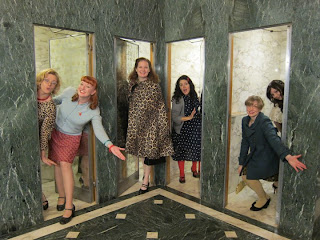 Ladies in the swanky I. Magnin's Ladies Lounge, THEE place to meet. Photo courtesy of Doe.

So basically, my New Year's Resolution is to be more like Sheila E and live the glamorous life. And to win a million dollars and lose like 50 pounds and get invited to Kate and William's wedding, but whatevs. All in good time.

And, yet again, to get back on this blogging train. It's kind of like yoga. I sort of dread it because it's kind of hard and awkward but I love it while I'm doing it and then I feel even better after I'm done -- it's just the motivation to hunker down. (Hunker downward dog? Okay, that was really bad. I couldn't resist.) But I've got some tricks up my sleeve and Accomplishments Accomplished, so stay tuned.

Enough with the blathering -- onward and upward, whatever that means. Wheee!

xoxo
Posted by Sparkleneely at 4:16 PM

And seeing YOU in 2010 was one of the most bitchin' things about it... Along with YOUR big win and your new blog! You make every year stellar. xoxo