Though I wanted to kick them in the teeth at the time, how I wish I had been one of those pretentious foreign exchange students in high school. You know the ones -- freshman and sophomore years they were quiet and mousy, but then they spend a year in France or England and come back with a beret and a fake accent and pretending to forget what a nickel is worth, transformed by their experience. I wouldn't exactly say I was ever jealous of these kids, as they were insufferable and that wasn't worth the tradeoff, but mon dieu I wanted to go somewhere.

I did, however, have one foreign travel experience in high school, when I went to Tijuana for a day with Lisa Basso and her parents. What I remember the most was the donkeys painted like zebras (and no one wanted their picture taken with one and I was bummed), an old and dirty Coke machine had cokes for 25 cents (though Mrs. Basso warned me against buying one, because one never knew how or when Montezuma's Revenge would strike) and a not very pleasant cab ride to the Border or something, where the cabbie pretty much ripped off the Bassos and there was some yelling in broken Spanglish. (It was totally exciting!) And Chiclets! I bought a bunch of Chiclets from little kids. And yes, folks, that was my big foreign travel experience, all the way up until my 30s. 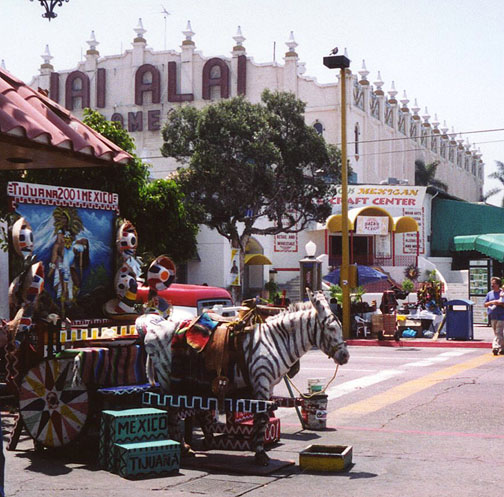 But, as I said in my last post, I got a passport and a ticket to Paris, and I can actually say -- my life hasn't been the same. You know what they tell you about travel, how it opens your eyes and enriches your life and you learn so much, etc. etc. etc. -- it's true. I dream about Paris constantly. I can remember, with absolute perfect clarity, all those days spent walking around and nights spent eating and drinking. Even little moments are crystal clear, like being in Le Pied du Couchon (the foot of the pig!), a restaurant my parents went to in the 60's, ordering the onion soup (it ain't French Onion Soup in France) and fiddling with the silverware against the thick white tablecloth, feeling awkward yet elated. And walking around the Louvre on my first day there, and the art wasn't as exciting to me as peeking out the windows at Tuileries so I just left the Louvre (imagine having that choice!) to sit in le jardin and marvel at the Eiffel Tower in the distance and that I was really there. And my first foray into a cafe alone, attempting my Francais, and the waiter smiling and patting my shoulder and answering in English, but in a good way. And the way the floor creaked in Shakespeare and Company, the first sip of chocolat chaud at Les Deux Magots, the golden snail on Rue de Montorgueil... it also didn't hurt that I stayed with good friends who live there and went with one of my best girlfriends, Dolin, plus there were about 6 of my friends there at the same time as me, so it literally felt like a moveable feast. It was amazing. But this trip wasn't only Paris -- we also went up to Brittany and Normandy. In Brittany we stayed in a walled city, St. Malo -- all cobblestones and pirate history and delicious seafood and a teen tranny who worked in the gift shop. (It was the weirdest thing I saw on the whole trip, except for the crazy gypsy lady who attacked us at Les Halles.) We met some crazy Bristish bicyclists (who were all judges and magistrates or something) who were big fans of The Sound of Music and Meatloaf and drank and sang with them in a pub until the wee hours of the morning. We went to Mont. St. Michel, a castle-like island that looks almost sinister until you get inside and are charmed by the winding streets and silly shops, where I bought a cliched stripey scarf because I was freezing. But what this trek even more special was that we went to Utah Beach in Normandy, to scatter some of my dad's ashes. He was D-Day Plus 4, meaning he arrived on the beach June 10 and had been circling in the water for days, sick and dizzy but determined. On the beach he recognized one of his friends, lying dead in the sand. And then he marched.

Sixty years later as we drove through Northern France, through towns with rues named for Eisenhower and possibly even the same roads my father walked on, I clutched my little baggie of his ashes and shook. When we pulled up to the parking lot, my knees were so weak I wasn't sure if I could even walk straight. It was so overwhelming -- to be in that spot with not only so much world history, but with my father's (who passed away in 2001)history as well, with all the stories I'd heard since I was a little girl. It was calm and serene and the rain we'd had the day before had disappeared, and the tide was far out, so we walked for a while and decided to scatter them in a small estuary.

We stood in a circle, and I said thank you to my dad, who was brave and good and I missed him, and I opened the baggie and poured the ashes out. The water, which had just been a tiny stream, began to bubble and swirl and Brice said, "I don't know if I believe in miracles, but I think we just saw one" and we cried and collected shells and they survived the long trip back to the states intact. Another small miracle indeed.

Later that day we stopped in Dinan for lunch, and then Belleville for a drink, and then back in Paris Brice drove us in circles around the Arc de Triomphe, blasting "The Guns of Navarone" by the Skatalites and Dolin and I hung out of the windows, screaming with joy.

So yes, my first trip out of the good ol' US of A can only be described as magical. My only regret is that I didn't do it sooner, but if I had been one of those insufferable foreign exchange students, how much would I have gotten out of it, other than an even more unhealthy love of shoes I can't walk in? I still look back and am astounded by the perfection of those two weeks, and how, even though it was Paris, it was still so normal. We saw an awesome fight in a restaurant, Dolin and I had our typical squabbles and hysterical laughter, we chased the feral cats in the courtyard, drank and ate too much, bought pointy toed shoes and extra suitcases to lug crap home, and one day snuck out to McDonald's because, well, there's only so much baguettes and escargot we could take, and we gobbled our McPoulet sandwiches or whatever, feeling guilty and foolish and utterly American. Which, I learned, was okay.

And, I really do get to say to Dolin, "We will always have Paris." What a nice tribute to your dad. He'd be proud of the woman you have become.

The part about your dad really choked me up. He must have loved you fiercely - and you him.

Everything else left me dizzy with envy. You lucky, lucky thing.

Dr. Monkey -- thank you so much. I only hope so, all the time. But that day was the most extraordinary of my life, and it felt so good to do something that special to honor him. Big hugs to you.

And no need to be envious -- go get your passport and you, too, can take Paris by storm! Believe me, if I can do it, so can you!!!
xoxo

Girlfriend! You made me laugh (donkeys painted like zebras) and cry (dad story). I'm so glad you got your passport - otherwise it might've taken us longer to meet (you know i woulda hunted you down eventually!)

gemma dear, I didn't have enough room to talk about the fabulous trip to Melbourne -- I dream of Melbourne all the time, too!!! And I am so grateful that my passport brought us together -- but I know we would have found each other anyway. :)

And never fear -- YOU will be the star of an upcoming entry! And did you see I "blog rolled" you!!!

Yay! I want to go back to Paris with you all the time. I just wish I didn't have to work the 2 weeks you were there. But we did have a lot of fun! I will never forget that trip.

Hopefully we'll be able to go to France together some day. I love the story about your trip to Mexico and of course spreading your dad's ashes, which I know was moment you'll never forget...I wish I could have been there.

What a great entry! The bit about Tijuana made me laugh. I spent one day in Tijuana myself and it was one day too many! Though I would have loved to have seen the donkeys painted like zebras.....

Paris. I've spent my entire life bouncing around the world (my Dad's job), and Paris is still the most enchanting city in the world to me. I've only been twice (once on my honeymoon, and once last year with my mother) but I know I could easily spend years there without ever getting bored.

And your father. To have gone, young and innocent to war, in that place and time. To have seen a friend dead, and then to have gone on and on. What unimaginable pride and pain. And how beautiful and sad that this place that marked him, that took his innocence, has a part of him in death, as it did in his life.

If you want to visit my blog, it's:
http://art-lifeandlovelizabeth.blogspot.com/
I'll put you on my blogroll!

Dolin -- that was the best two weeks of my life -- I'm so happy we shared it! And next time we go -- you are NOT working. And we will all make sure we each have keys! :)
Je t'aime, cherie!

Mr. Delinquent -- I wish you could have been there, too. You know that. Someday we will go together!
xoxo

Oh Elizabeth -- I read your comment earlier and my eyes welled up. You have such a lovely, lovely way with words. And now I am going to enjoy your blog!

Merci for taking the time to read it, and I am honored.