Like many delusional children, I had dreams that I would grow up and be a glamorous movie star. (And a writer. And a Broadway sensation. And an ice cream truck driver if those things didn't pan out.) I just knew I had that certain *something* that was special, and that I was destined for Greatness. Tatum O'Neal? BAH. Kristy McNichol? Pffft. Jodie Foster? No way! (Though one of my mom's friends told me I looked like her, in the era of Candleshoe, and I cried. What I wouldn't give to look like her now.) They were NOTHINGS. I, Karen Finlay, was going to star in movies, be a regular on The Love Boat, AND be on the cover of Dynamite Magazine! (And be a writer, a Broadway sensation and an ice cream truck driver.) I was going to take the world by storm! 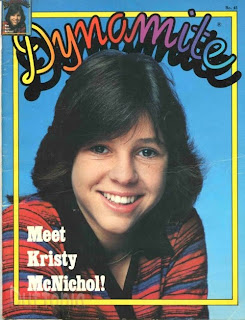 This really should have been me. From Super Seventies.

Alas, I lost a few things along the way to my star on Hollywood Blvd: All self-esteem and ambition once hitting puberty and junior high school -- or middle school as they call it nowadays -- that time frame between 11 and 13 that should, really, be totally illegal. But I did discover a fundamental truth about myself at a young age while auditioning for a minor role in a school production of Blithe Spirit: I couldn't act my way out of a paper bag. I couldn't even lie convincingly to my mom when asked, "Who ate all the Girl Scout cookies?" Nor could I tap dance, sing, have a fashionable hairstyle, or do math. (Math has nothing to do with it, but I really can't do math.) I also can't drive large vehicles, so my ice cream truck dreams were dashed, too.

So I kind of stuck with the writing thing instead of the whole acting thing. But still, like most delusional people, I harbored a secret fantasy that someday I would become a famous movie star -- but without really doing anything like have talent or beauty or mad acting skillz. Though I don't think being famous is as fun as it used to be -- I have gathered that in the past few years, in order to be a movie star, one must go to rehab, enroll in upper division college courses, have a baby (or pretend to), get married (but only for 1 month to 1 year), engage in what is called "canoodling" with rap stars, have a clothing line with your name on it but designed by people with the fashion sense of sewer rats, and one's only form of self-expression is infantile Twitter posts, because there's no time to actually make movies while keeping oneself famous.

So being a movie star isn't quite as glamorous as it used to be, but some old dreams die hard. I can't help plotting my outfits and witty repartee for future appearances on the late-night talk show circuit and my Oscar acceptance speech anyway. A part of me longs for the greasepaint... The lights, the cameras, and the action.

Well, in 2011, those dreams came true! I, Karen Finlay, starred in not one but TWO films this year -- that's more than Natalie Portman, and she won the Oscar! (Though I know my Best Actress acceptance speech would be WAY better than hers. Harrummph.)

The first one was a super cool project by my friend Nicole Burch, who is an incredibly talented compositor and digital artist, and whose credits include Captain America and Thor! She had an idea for a 50's themed short she wanted to direct, and asked if we'd be willing to lend our house and star. Well, since I've wanted to be a famous movie star for like forever (and really, because Nicole is a dear friend and I was super honored to be asked), we jumped at the chance!

And it was so much fun -- a REAL film crew came to the house, with lights and sound and all that professional equipment! 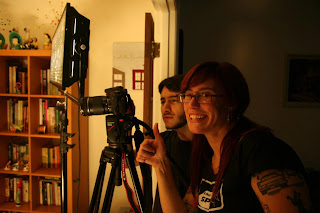 Nicole and Kyle giving the thumbs up!

And we did real takes and everything, and Nicole directed me on mad acting skillz: 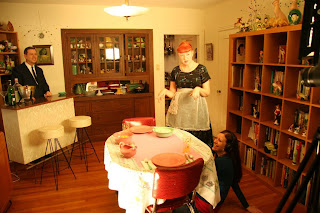 "So, like, it should go there? How should I play it? Should I look happy? Sad? What would Zsa Zsa do?"

And then when it was all over we were sad and were going to miss our new friends: 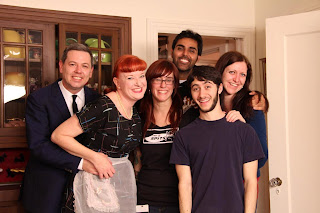 And then Nicole added 3D animation, the multi-talented Ryan Rorie added the soundtrack, and voila! It's Fantastic!

What's For Dinner? from Nicole Burch on Vimeo.

I LOVE it! I wish I were a better actress (maybe I should have kept those dreams alive and taken a couple of acting classes for my Big Moment) for Nicole's sake, but wow! It was so cool to be part of it, and so awesome to see the final outcome. What a huge honor!

But I didn't just take a hiatus and fly off to an exotic island vacation and canoodle with a local rap star, oh no. I jumped right back in front of the camera! I was thrilled to collaborate with my BFF Carrie Swing, whose blog, Carried Away With Vintage Gourmet is one of the best blogs out there. (Have you checked it out? If not, BOOKMARK IT NOW!) A girl after my own heart, she re-creates vintage recipes and blogs about it, with often hilarious results. We were talking about how we could bring the world of vintage recipes AND Tupperware together (yes, I'm still selling the fantastic plastic!)and we decided to make a video!

So after getting Jon to be the cameraman (and bartender), we filmed ourselves making "Best Oven Hash" from the 1963 Better Homes and Gardens So Good Meals cookbook, using all Tupperware products (except for my mom's 1963 Fire King casserole dish -- don't ever put Tupperware in an oven!) and it was so fun!

Here's Carrie's blog entry that includes the recipe -- it really IS delicious!

We didn't even practice OR edit! Not bad, I say... But if I were a movie critic, I would have to say that Carrie and Tupperware are the stars of the show, and I need to go to rehab and get on an intense Jillian Michaels workout routine and get rid of the weird lisp I just discovered I have. But you know what all that means? I am totally on my way to becoming a REAL movie star and on the cover of People and US Magazines! And isn't Julia Roberts married to her cameraman? See, I'm totally on the right path!

Now, I know that the book said to MAKE a video, but don't worry, I did THAT, too!

CHECK OUT THE ARTISTRY. MARVEL at the technical aspects! Look at the zoom ins, and the sweep of terrifying food wreckage. See how the Sterno flames from the cabbage hover in the center, with Vienna sausages orbiting outwards? That is symbolism for the heat and passion within the artist's heart, and the ideas and creativity emanating like planets, representing crystalline thoughts realized from... Oh WHATEVER. It's 13 seconds of a flaming cabbage dish from this year's Mid-Century Supper Club Potluck, but honestly it looks a lot better than most of the "arty" films I've endured. More festive anyway.

So I'd like to thank the Academy, errr, Nicole for asking us to be part of her special project, which was such an honor and so much fun; Carrie for being my BFF and fabulous collaborator, Jon for being an awesome boyfriend, bartender and cameraman, Tupperware for just being terrific, Mona San Filippo for the flaming cabbage, and all of YOU for reading my blog!

Now, if you'll excuse me, I have to go to The Vanity Fair Oscar Party, because that's the fancy one, dahlings. I've chartered my own ice cream truck limo, and I can't wait to say, "In your FACE, Kristy McNichol!" Maybe we'll get on the cover of Dynamite Magazine together. And don't worry, I'll totally Tweet about it.

OMG! I had that issue of Dynamite. (I wonder if it's still at my parents' house.)
And Karen, we love you MORE than Natalie Postman.

And what a FANTASTIC post it is! And oh my god you and Jon need a YouTube series... you guys were great!

Ditto on Carrie's blog as well and so great to see you both last night even if just for a blink.

I tried to post this before and just saw it didn't go through. a) what an honor it was to do our video and b) OMG I am so in LOVE with the other one!!! Ummm.... what's for dinner? You and Jon are AWESOME!!!!! xoxoxxo