Science class was never really my forte, and neither was math. (When the whole controversy came out about the Talking Barbie proclaiming, "Math is hard!" I agreed with her. Sorry. I know the whole empowerment of girls was the whole point, and I agree with that, but seriously? Like math is like totally hard!)

But there were some things in science that I loved. I even got extra credit points in sixth grade science class because I had EIGHTY-NINE observations about a burning candle. I sat in the windowless bathroom -- what my mom called "the powder room" -- with the door closed and stared at a candle, and wrote down 89 points I observed. I won a free sandwich -- my teacher took me and Heidi Khashabi (who only got like FORTY observations) out to a deli for lunch. I felt very sophisticated, eating a deli sandwich with my science teacher and dumb old Heidi Khashabi, while everyone else ate their homemade sandwiches and twinkies in the cafeteria. Sniff. Thanks, science class!

But there really were some things I loved. Sticking a piece of celery in colored water and watching the food coloring travel through its veins. Dissecting a rat, even though I pretended to be grossed out and I was to a degree, but there was something thrilling about it. (But the pregnant sharks and cats and everything else did, in fact, gross me out.) Memorizing the periodic table symbols. (Gold is AU! Neon is NE! I forget the rest!) And there were some things I hated -- long lectures, equations, the co-ed sex ed unit where everyone had to submit anonymous albeit embarrassing questions and no one could look at anyone else. God, I can still feel the utter horror and humiliation, sitting next to John Sutherland and wanting to die when our groovy teacher, Mr. Rago, said, "Masturbation is completely natural." OH MY GOD.

But yes, our junior high science teacher was, in fact, groovy. He was young, swingin', mustachioed, elbow-patched, drove an Alfa Romero sports car, and went on to be one of the inventors of Teddy Ruxpin, the terrifying talking bear toy. He referred to the young French teacher, Madame Bensley, as having a certain "je n'est sais quois," which we repeated to her and she blushed. All the "cool" teachers hung out at a local bar in Walnut Creek next to one of my parents' favorite restaurants, and I as always scared I was going to run into one of them as they sipped their cocktails and talked about what little shits we were. (Seeing teachers outside of school was always one of the most disconcerting things that could happen. I saw the music teacher, Mr. Dunkel, playing the stand up bass at my parents' friend's daughter's wedding, and it FREAKED ME OUT. He had a runny nose as he played the bass, too. I went and sat in the car.)

In high school, my science teacher was also groovy, but where Mr. Rago was "with it," Leon (we called him by his first name) was firmly stuck in the late 60's. He wore psychedelic shirts and rumor had it he smoked a bunch of pot at lunch with the guys in Shop. He hated my friend Tammy and me, and wouldn't let us sit together, so of course we made fun of him relentlessly, and wrote notes to each other from across the room. We also cut off the frog appendages during the dissection unit and then we threw them at people. Oooh, such the rebels.

But I liked some things about science, even though I never even thought about pursuing it. For one thing, there was the whole math part, which I started failing as soon as long division was introduced. (I overheard my teacher tell the aide, "Karen has no aptitude for math." And bingo! No aptitude for math.) And I was a diehard English student, where I excelled. Sometimes. Science was a class I endured, and with the exception of my 89 observations about a candle, I didn't go above and beyond. (Though I did sort of envy the nerdy boys who reconstructed a volcano, ala Peter Brady.) I figured that I would never need math and science in "real life," and coasted along, okay with the fact that I was not, in fact, a rocket scientist.

Funny enough, two things from those long ago science classes have stuck with me. One is the "Big B, little b" stuff from genetics. As in, two blonde, blue eyed parents can never have a dark haired dark eyed child (little b), because they have recessive genes and dark hair is dominant (Big B). (And being a redhead, I was always miffed and confused, because I didn't fit neatly into those traits at all. I was a mutant.) So when I see really bad casting in TV shows and movies, it makes me crazy. Even watching LOST, my favorite show, makes me twitchy because both of Jack's parents have super light eyes, and his are dark brownish green. But the worst perpetrator of this genetic casting failure was the show, "The Wonder Years." 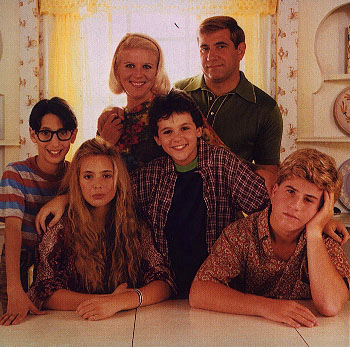 Now, I loved that show. I really did. (And no, I never bought into the rumor that Paul was actually Marilyn Manson. Bah.) I was enchanted by Winnie Cooper and rooted for them to fall in love and get married, related to the episode about piano lessons, and sobbed at the finale. But the problem to me, week after week, that Jack and Norma, the parents, had blue eyes. Yet the adorable moppet Kevin and his super wacky hippie sister Karen had BROWN EYES. With the exception of Wayne's godawful mullet, he was the most realistic casting for the show. So see? I do use science in real life.

And the other thing was that I learned my blood type. (Aha! You thought I was meandering, off on a tangent. That's how I feel, but I'm getting somewhere.) At least I think I learned my blood type, because after all, I am not a rocket scientist and could have done it wrong. We had to prick our fingers with scalpels (the same ones we used for dissecting creatures pickled with formaldehyde, and they probably weren't even sterile) and then rub our blood on some special piece of paper, and then the antibodies or cells or whatever would attract to whatever chemicals and then, voila, we had our blood type.

I scrunched up my eyes tight and slashed my left index finger, sucking my breath in but not shrieking like the other girls. (Though I probably said, "Oh OW!" as I smeared blood on the piece of special paper.) It hurt like a BITCH. And then I got my results: AB.

I was puzzled. We had been told that AB was the most rare, and we could get ANY blood from ANYONE, but we could only give blood to other ABs. It made me feel selfish -- I could take take take, but what was the use of giving anyone my blood? And to top it off, all the cool kids in class seemed to have Type O, which made it the cool blood type. I couldn't even have cool blood. I tried again, but still it came back AB. I was doomed to be a universal recipient, not a universally cool blood person.

We were not sophisticated enough to determine whether or not we were positive or negative, and I still don't know that. I have never donated blood -- I feel that my blood is not only uncool, it is also completely polluted and if it ever ran in someone else's bloodstream, they would be poisoned on the spot, so therefore my omission of blood is saving someone's life. And the last time I had to do a blood test, I misunderstood and not only fasted, but didn't drink water, either. I was so dehydrated and it was like they were vacuuming my veins dry; I nearly passed out, but my disgusted fascination and embarrassment of how I messed up kept me awake.

So... yes, I know my blood type. The selfish blood type. And, inadvertently, discovering that has kept me from being a cutter (I cannot stand even a papercut) and an intravenous drug user. (Okay, that's not the only thing keeping me from that.) And maybe, just maybe, if I do #37 "Detox Your Body," I will be able to participate in a Blood Drive. But only if I can travel back in time like in "When Peggy Sue Got Married," because frankly, that's the only real appeal for me -- I do have selfish blood, you know.

For one thing, there was the whole math part, which I started failing as soon as long division was introduced.

Between this and being a feminist who agrees with Barbie that math IS hard, once again, we are the same person!

this entire blog needs to be published. genius.

i had to give about 362362921 viles of blood when i was pregnant and then i has that pesky c-section and they ask your blood type like 273709201 times but, because MATH IS HARD, i have totally forgotten what mine is now. i find this ironic and odd.