Accomplishment #4: Connect With a Role Model (#9)

I've had a lot of role models in my life -- my glamorous second grade teacher Mrs. MacArthur, Dorothy Parker, Neely O'Hara (you can see how my life has turned out)...

But most all of, my main and most honorable role model has been Judy Blume. (Sorry, Dottie. I love you and probably relate to you the most, but you were a drunk and now quite dead, so connecting with you is somewhat impossible though I do toast in your honor at The Algonquin twice a year.)

The first Judy Blume book I ever read was Blubber. I found at at a book sale in our library -- I can remember it with such clarity -- even how the sunlight shone on the array of books. And there it was: The cover art looked so REAL! And the writing inside was just as real -- people being mean to the fat girl and then turning on each other. TOTALLY! It was just like my school! (And bonus: I learned what a flenser was. Someday, maybe, I'll be a flenser for Halloween, too, with gold sparkle boots.) I gobbled all Judy Blume books up, and every time a new one came out, it nearly gave me an apoplectic fit.

Around the same time, I decided to be a writer. Specifically, a young adult writer, just like Judy Blume. I solemnly announced this to my father in the kitchen one day. "Make sure you get a day job," he said. (He was right.) And then he said, "You might not want to be a kids' writer forever -- you might decide to be an adult author as you grow older." (He was wrong.)

Deeply saddened that my hopes and dreams were dashed by my dad, I decided to write to the one person who could understand: Judy Blume herself. And oh, how I wish I had that letter. It was on Hello Kitty stationery (I told you, I was a BIG FAN), complete with drawings of Hello Kitty (because there weren't enough on the actual paper itself, I guess), sparkly stickers, and in my best handwriting with Hello Kitty markers that were about an inch long. And it was SEVEN PAGES.

I felt that Judy was my best friend in the universe. I wrote out all my writerly dreams to her, and then added about a dozen PPSes because I kept thinking of all the neat stuff I wanted to tell her -- that my dog's name was Spot, I liked horses, boys were crummy, and my favorite: that if she dedicated one of her books to me, I would be forever grateful. (Though I'm sure I spelled it "greatful.")

I was very proud of my letter. So proud, in fact, I read it to my mother. If she were secretly jealous that I was spilling all of my deep, dark secrets to Judy Blume ("I hate mushrooms! Do you?")and not to her, she didn't let on. When I got to the part about dedicating the book to me, she winced. "I don't think you can ask that," she said.

"Oh, I'm sure you are," said my mom. "But Mrs. Blume might have a lot of other people she would like to dedicate her books to. She's never met you, so she might not do it and you would be disappointed."

I wrestled with this and took it back to my room, where I re-read the letter carefully. I decided to follow my dreams and stuffed it into the matching Hello Kitty envelope and, as usual, never mailed it. Thank God. I can only imagine that I found it much later and ripped it to shreds in horror. (By then I was probably already worldly enough to have read Forever. Page 81, girls. Page 81.)

So I never actually contacted Judy Blume, though I continued reading her books -- as a teenager they were a guilty pleasure that took me back to a simpler time, when I actually didn't have my period and the pressures of teendom were fun to read about instead of experiencing them firsthand. Later on, my friend Leslie saw her at a signing and took a picture for us -- Judy Blume in the distance -- and we were thrilled. When I was applying for grad school, Leslie sent me an article about Judy Blume and wrote at the top, "You can do it, Karen! Love, Judy" and I hung it on my wall. I wound up going to grad school, and while there, her books were part of the curriculum in my YA classes, and I wrote a long memoir piece with Are You There God, it's Me, Margaret at its center. So Judy Blume has never left me after all these years.

Then, a few years ago, I was at ALA in Chicago, and found out that Judy Blume -- THEE Judy Blume -- was going to be doing a signing a few booths over. I asked my boothmate if I could go, explaining how important it was, and she said yes. I went and stood in the long line, behind a horrible nerdy woman who would not shut up. I was super excited and feeling a bit guilty about leaving my partner alone in the booth, and was planning on saying a quick, "Hello, nice to meet you, I love your books." Nice and simple. No big deal.

Soon we were at the front of the booth, and it was Nerd Girl's turn. And as she had been the half an hour in line, she was the same way with Judy Blume. She would not shut up, even though the handlers were trying to push her along. She was ENCROACHING on my 10 seconds with my idol! She stood and yapped while judy took my book and signed it, and then, finally, she looked at me and smiled.

And I burst into tears.

I think I was more surprised by my reaction that she was -- it's probably happened to her countless times. I sobbed and hiccuped and told her that she had changed my life, I wanted to be a writer because of her, I LOVED her and wrote her a letter in fourth grade and never mailed it... and she stopped everything and took my hands and looked at my nametag. "Karen, are you published yet?" she asked.

I shook my head and snuffled.

It was like being blessed by THE POPE. All the handlers were laughing, and asked if I wanted a picture with her. DUH! I looked like crap but it was me and JUDY BLUME. 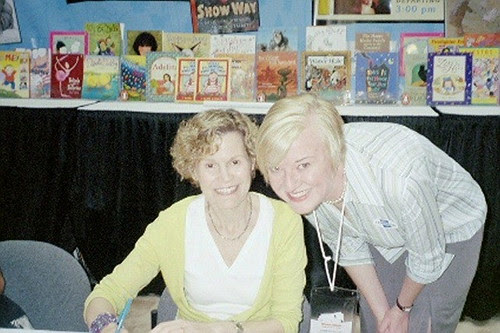 And, of course, I went home and told everyone about it. And then a few years later there she was again at ALA, and I went and stood in line, and didn't QUITE burst into tears again, but got overexcited nonetheless and she told me to get cracking on my writing, and she laughed when I told her that she was The Pope.

I look a little too excited and she looks a little weary: 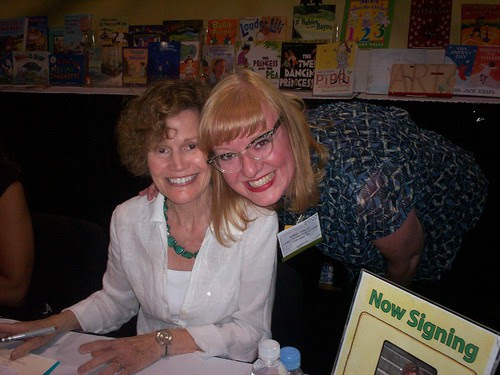 So, yes, I did connect with my role model, and she was amazing. I don't know if it's exactly an Accomplishment, because it was happy kismet that I was there at the same time, but it did enrich my life. She did a reading at a local bookstore and I didn't attempt to go up front, because it's way more important for the kids -- the current and future generation of Judy Blume fans -- to meet her. I'm lucky that I've met her twice.

And, actually, she DID dedicate a book to me after all: 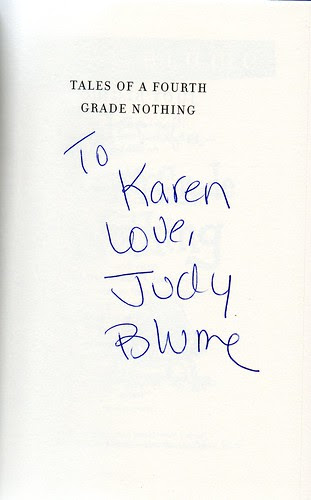 Email ThisBlogThis!Share to TwitterShare to FacebookShare to Pinterest
Labels: judy blume accomplishment 5 staycation all I ever wanted

Posts like this are why I love reading blogs. What a sweet post this is. I'm sending you a big hug for making my day a little bit brighter.

I daresay this is one of my favorite blog posts I've read anywhere ever!

And Judy is absolutely right: you will be published! I haven't had this much fun reading anything online or off- in a long time!!

I want to give all of you big hugs. This whole public blogging thing is new for me, and I appreciate your reading and commenting so much... and right back atcha for all of your blogs. I'm fans of all of youse.

I actually had tears running down my face reading this. You're so good.

I'm going to steal your manuscript and deliver it to Judy the next time she's in town. You do need to get crackin'!!

PS
I am anonymous.

Ok, you had me crying too with this one (I'm reading all of your blog posts backward today), Judy Blume! Wow. And I know you and you know I know you, and that makes this all more fabulous than ever!
(ok, I DID get fired this week, so I'm a little teary, but this post is the best!)
love you Kara,
xoxoxx the first Lara

i could die of the awesomeness!
xo chrissy

I love that you burst into tears...I almost did just reading this! What a fantastic story. And FYI, boys are still crummy :-)

I nearly burst into tears over this! If it weren't for Judy, I don't think I would have survived my teen years.

Brilliant blog! I loved Judy Blume as a child, too. I didn't realize until reading this, exactly how much of my identity was shaped through her writing. Thank you!